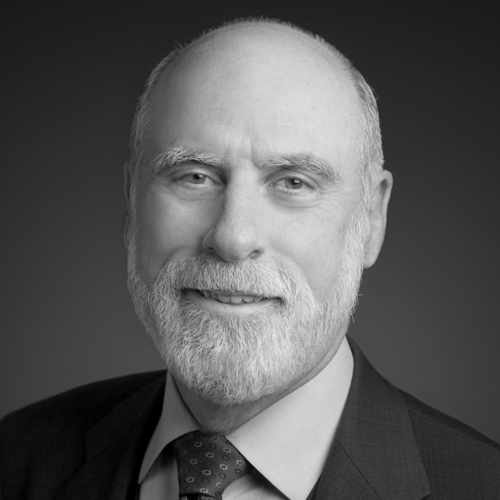 Vinton G. Cerf
Vinton G. Cerf, widely considered one of “the fathers of the Internet”, is VP and Chief Internet Evangelist at Google. He helped found ICANN and was Chairman of its Board from 2000 to 2007. The recipient of many honorary degrees he has been awarded, inter alia, the National Medal of Technology, the Turing Award and the Presidential Medal of Freedom.

This is a wide-ranging compilation of opinions about the Internet and various truths and myths about its operation, use and impact. While I don’t agree with all of the characterizations found in this collection, I think it is important to examine assertions made about the Internet and its applications both to clarify misunderstandings and to understand how some of these misrepresentations come about. Some originate in a kind of zealous hubris about the independence of cyberspace, which, on closer inspection, is revealed to be more bound to the physical and political world than one might think. Others strike me as excuses for adopting positions that are inimical to the beneficial uses of the present day Internet. What is important is for readers to approach these analyses in the spirit of ascertaining useful truths about the complex artifact that the Internet has become. The implementation and use of the Internet varies significantly from one jurisdiction to another, depending on physical infrastructure, culture, societal norms and available technology. The “myths” need to be examined and evaluated in context to be understood and properly evaluated.

My own biases are sure to be evident owing to my long-time involvement in many aspects of the Internet’s creation and evolution, but I continue to believe that, as a platform, it has and will continue to be an extraordinary source of information, innovation and collaboration. The World Wide Web that rides atop the Internet infrastructure has promoted a cornucopia of applications and information infusion comparable to the invention of the printing press. But the unique flexibility of the underlying computing infrastructure provides a universe of functionality unreachable in the static print form. Content can be searched, translated, organized, repurposed, and adapted in ways limited only by our ability to imagine and write software to implement new capabilities.

The profusion of information found in the Net puts a burden on users to think critically about the quality, accuracy and veracity they find. This takes work and, in some sense, is the price we pay for the information freedom found in the online world. Those freedoms are at risk, however, precisely because the borderless Internet is more embedded in the political landscape than its enthusiastic promoters sometimes wish. Dispelling myths has the benefit of placing a reality lens on this remarkable environment and the resulting clarity can help us to steer a course towards an Internet whose benefits can consistently outpace its deficits.

In this complex digital world, we – citizens, politicians and business leaders – need images and narratives that help us understand the world we live in. In most cases it is quite enough for us that these are plausible. We often cannot check whether they are true, and so the conclusiveness of a nice analogy or the fascination with a concept that brings complex developments down to earth is enough for us.

The echo chamber, one of the myths described in this book, can serve as an example. It has almost become a catchphrase to say that “we all live in echo chambers” at the opening of conferences. While this sounds plausible, it has only one small flaw – it‘s not true, at least not in this broad sense. It has been demonstrated that – at least in Germany where the “echo chamber” narrative is very popular – real echo chambers only exist for smaller extremist groups, not for society at large. Most people still want to be part of an overall “societal discourse” and use a broad media repertoire to gather information.

For the Internet, the services and the social practices that the Internet makes possible, this dependence on conclusive descriptions, metaphors and explanations is particularly strong. The Internet is not tangible, communications over networks are ultimately based on protocol standards. Nothing could be more abstract and yet its factual transformative power could hardly be greater, for better or for worse. Here, we are particularly dependent on images and narratives to orient ourselves in this realm, but also to find appropriate governance concepts.

Everyone who works with these metaphors, images and narratives has a great responsibility here. This is also and especially true for academia. It is not enough to carry out individual studies that refute the thesis of echo chambers and offer more sophisticated concepts. These concepts must also be conveyable in such a way that they can be connected to social discourse. Otherwise, the established myth will remain, even if some scholars know that it is empirically wrong. The authors and editors of this book deserve our sincere thanks – not only for drawing attention to this challenge, but also for starting to solve it right away.